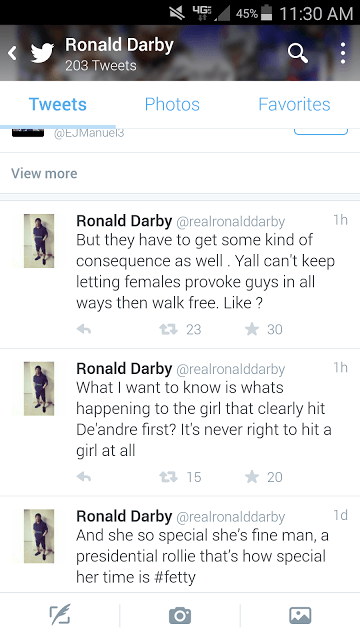 De’Andre Johnson was kicked off the Florida State Seminoles football team, and his former teammate Ronald Darby took to twitter to defend his teammate. He quickly changed his views and deleted some messages but the photos and tweets were already captured.

“What I want to know is whats happening to the girl that clearly hit De’andre first? It’s never right to hit a girl at all”
” But they have to get some kind of consequence as well . Yall can’t keep letting females provoke guys in all ways then walk free. Like ?”

” @BigSwerve5150 yes he grabbed her to not get hit. You can see he fist balled up to hit him but it’s still wrong on his behalf but it’s idk”

” @g_miller_ yea that’s true I just hate to see stuff like that at the end of the day . He worked his life to get where he at .But lord bless”

” People saying its a bad tweet for saying something should be done both ways ? I’m confused . If that was tall kid or loved one then what”

What do you think? Was Darby wrong?