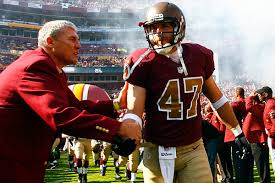 Chris Cooley is eyeing a comeback

ESPN’s Adam Schefter, tweeted today that the Arizona Cardinals have have spoken with former Redskins TE Chris Cooley and expressed interest in signing him to a contract.

Adam Schefter    @AdamSchefter
Cardinals have spoken with former Redskins TE Chris Cooley and have expressed interest in signing him, per league source.

This comes just a day after Cooley said that he would consider returning to the NFL if an opportunity presented itself.