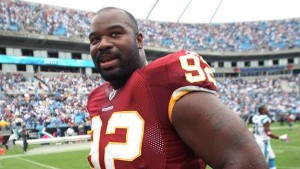 Albert Haynesworth was an animal in the NFL, but his days ended shortly after receiving a 100 million dollar contract. Now Haynesworth wrote a letter to himself and it is a must read for all future college players.

I know your knees hurt so bad right now that you can’t sit in the car for more than 20 minutes at a time, but don’t freak out about it — it’s just growing pains. What did you think was going to happen drinking two gallons of whole milk a week? You start high school this fall, and you’re just going to keep getting bigger. You’re going to grow five inches over the summer and when you show up for track practice on the first day of school, all your buddies are going to look at you like, “Dude, you got tall.”

You’re going to grow to 6’6”, an inch taller than your hero Reggie White. And like him, you are going to be an athletic monster. During a playoff game your junior season, you’re going to run down the field on punt coverage and stick out your arm to wrap-tackle the returner, only you’re going to clothesline him with so much force that he wraps around your arm and does a backflip. The crowd is going to react like it’s pro wrestling. Don’t worry, the kid will be okay. This is going to be your first experience of playing with so much adrenaline that you’re straddling the edge. It will feel like an insane kind of control. You need to learn how to reign this in. More on that later.

In the state championship game, you’re going to rack up 15 tackles as a defensive tackle. Colleges will start recruiting you hard after that, and things are going to start happening very fast. Remember that you’re just a kid from a town of 4,000 in Hartsville, South Carolina. Because when you get to the University of Tennessee, you’re going to feel like a very small fish in a very big pond. This feeling won’t last, but it’s going to feel that way for a while. You’re going to have some very lonely moments. During your freshman year, Coach Fulmer will introduce you to a psychologist who will become one of your best friends. He’ll listen to your problems when you’re struggling. You’ll go tubing and water skiing on his boat and hang out with him all throughout college. He will come to your house and meet your mom. I know this sounds crazy, Albert. But do not trust this man. As soon as you decide to declare for the NFL Draft, he will say, “You know, I do some investing on the side. I’ve been helping other guys out for years. You should let me handle your money.”

You’ve heard the horror stories about guys buying a fleet of Rolls Royces and gold chains and going broke. You’re not an idiot. You know you should invest your money, and this guy is showing you a business card that says “Morgan Stanley” and a multi-million dollar portfolio. I know he seems trustworthy. I know he seems smart. But if you let your friend handle your finances, he’s going to take millions from you.

Are you paying attention now?

Remember when you were 8 years old, watching an NFL game with your mom, and you turned to her and said, “That’s what I’m going to do some day”? Well, it’s going to be a lot more complicated than just a simple game. When you get drafted by the Tennessee Titans in the first round of the 2002 Draft, you’re going to come into camp thinking you got this. Sure, you only benched as much as some of the safeties at the combine, but you can run. You have that short-burst playing power. You’re going to be a better athlete than 85 percent of the offensive linemen you’re up against. You’re going to run over guys in practice. But for some reason, when Sunday comes around, they’re going to do just enough to stop you. Because they have the brains. Year by year, you’re going to figure this out and start picking up little tricks.

In 2006, everything is going to change, for better or worse. By now, you will fully understand that to survive in an NFL game, you have to work yourself up into a kind of insanity. This is what it takes. Before games, your coaches will essentially pimp you out. They’re going to use humiliation and fear as a means to make you play as hard as humanly possible. One of them will literally show you a scene from the movie Deliverance during a mid-week meeting in order to demonstrate just how badly the opponent is going to own you. You will love this, in a way. It will make you go absolutely nuts. The NFL culture will brainwash you into a certain mentality: “My opponent is trying to take food out on my mouth, and I want to embarrass him in front of his family. It disgusts me to be on the same field as him.”

You will approach games as war. I don’t mean that as a cliche. There will be many times where you feel like your opponent is trying to steal your entire life. In October 2006, you’ll be playing against the Dallas Cowboys, rushing against the guard like you have thousands of times before, when you get your knee clipped from behind. You’ll get up, furious, and see that it’s the center, Andre Gurode, who hit you. This is an unspoken rule among lineman. You don’t do it. But maybe it was an accident. You say, “What the hell was that? You ain’t man enough to block me straight up?”

This will be one of the most significant moments of your life. You will go the sideline, and your vision will be red. You will be madder than you’ve ever been in your entire life. A switch will get flipped. You will not be able to control the monster, and you’ll step way over the line for the first time. I know this will seem impossible to you — but you will stomp on Andre’s head, cutting him above his eye and causing him to get 30 stitches.

After that moment, you will never be looked at the same way again. And the complicated thing is, this is going to help you on the football field. Even as the media and the league is vilifying you, the irony is that this mistake will put you on the radar of everybody in the NFL. Guys will think you’re crazy. When you return from suspension and you play against the Eagles, an offensive lineman’s helmet will come off at the end of a play, and he will look at you scared shitless, like, “Hey Albert, you OK? Just relax.”

Guys will be terrified of you. They’ll shy away from your side of the field. And that’s where things are going to get really murky. On one hand, people expect you to flip a switch and be a killer when you’re on the field, and on the other hand, they expect you to be able to instantly switch it off when it’s over. Should you embrace the bad guy? Is that who you want to be, even if it means success in the short-term? I still don’t know if I have the answer for you, Albert. What I know is that you’ll make back-to-back Pro Bowls in 2007 and 2008, and you’ll start to believe that you’re unstoppable. That you can do anything. That’s when you’re going to do something really dumb.

If nothing else, listen to me on this, Albert: Do not leave the Tennessee Titans. Your defensive coordinator Jim Schwartz is a mastermind. No matter how much I tell you this, you’ll probably never realize it until your career is over, but it’s true. You’re like a system quarterback. You thrive in a very specific scheme. When you hit free agency, the Washington Redskins are going to offer you $100 million. Everyone will talk about this (they won’t talk about the fact that most of that money is not guaranteed, or that the Tampa Bay Buccaneers offered you $135 million). The $100 million will become a huge burden. Take less and stay in Tennessee where you belong.

Oh, when you get on that first phone call with Dan Snyder and the organization in Washington, it’ll be all good. “We want you to play just like you did in Tennessee, Albert. We’re going to let you loose and destroy the Giants, Cowboys and Eagles. That’s your job.”

Then during your first OTA, you’re going to be introduced to a different brand of football. I can already see you rolling your damn eyes. How can football be different? I’m a defensive lineman. Well, football in Washington versus football in Tennessee was like the difference between a general physician and a cardiologist. Both doctors. One is just a little more sophisticated.

People are going to be all over you for your contract, and you’re going to feel really frustrated. You’re going to do some dumb things. But what people aren’t going to see is Mike Shanahan calling you into his office and saying, “Albert, we just want you to eat up space. All we want you to do is grab the center and let the linebackers run free.”

You’re going to look at this famous NFL head coach in total disbelief and say, “You want to pay me $100 million to grab the center?”

And he’s going to say, with a straight face, “Albert, if you have more than one sack this season, I’m going to be pissed.”

You will lose your passion for football in Washington, and it will be impossible to get back. In retirement, you will discover that your financial advisor has squandered most of the money you made with the Redskins, and he will be under investigation for financial fraud. Thankfully, you will have discovered a passion for restoring houses and buying property during your offseasons. You’ll even open up a BurgerFi restaurant in Knoxville (I know you love burgers). Instead of being on the beach in the Bahamas, like most people probably think you are, you will be hanging drywall in a condo in South Carolina. And you know what? That will make you extremely happy.

Remember to enjoy it a little bit,