26 teams attended Isaiah Battle’s pro day; Has a shot of getting drafted in Supplemental Draft 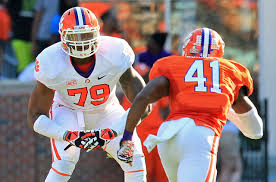 Isaiah Battle of Clemson could be drafted in the Supplemental Draft

According to Mike Reiss of ESPN, Representatives from 26 teams are attending Battle’s workout today. Battle could become the first player drafted since Josh Gordon in 2012.

While it is unlikely a team uses a top 3 round pick on him, a team could be very willing to use a late round pick.  Battle started 11 games at left tackle last year for the Tigers.  While his on field abilities are solid, his off-field character concerns could make him fall.

The offensive line coach from the Buffalo Bills, was on hand Tuesday for the pro day workout of Clemson offensive tackle Isaiah Battle.

I have been told by many he has problems with marijuana use.  If a team can overlook that, he could be selected high, especially considering he would be a day 1 or 2 pick if he was to stay in school.

Battle (6-foot-6 1/8, 312 pounds) went through a workout that was held indoors and run on FieldTurf.