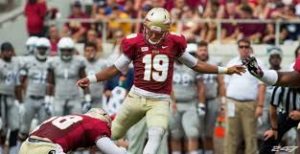 Roberto Aguayo has the best foot in the NCAA. He should be a draft pick

The Lou Groza Award is presented annually to the top college football placekicker in the United States by the Palm Beach County Sports Commission. The award is named after former Ohio State Buckeyes and Cleveland Browns player Lou Groza.