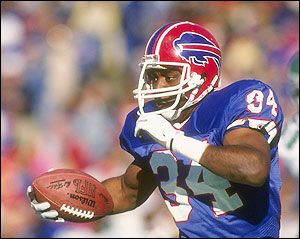 The Buffalo Bills spent a ton of money in the off-season, and they hired a new head coach in Rex Ryan. Everyone in the city of Buffalo is buying into the team once again, but it is a little different.  In the year’s past the Bills have avoided key positions, such as tight end and quarterback.  While the Bills have addressed every major position including the two listed with players who are solid contributors, the fan base is buying it.  It is hard to buy into anything after 15 years of losing, but one former Bills player feels you better buy in, because he himself guarantees the Bills make the playoffs this year.

“I’m buying in,” Thomas told Vic Carucci of the Buffalo News. “I know I’m not a part of the team, but I’m guaranteeing a playoff spot this year. You can write it down! I don’t know if it’s the sixth seed or the third or whatever, the playoff drought will end this year.

I would like to agree with Thurman, but until I see the quarterback play, it will be hard for me to jump on that ship.