Seahawks need to cut ties with Michael Bennett; What he said now should upset 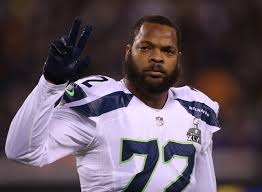 Michael Bennett wants a new deal, but is declining in play year by year

Michael Bennett of the Seattle Seahawks is happily skipping work outs because he is demanding a new contract.  Well the cocky defensive standout told Steve Wyche of NFL Media that it is “definitely possible” that he’ll stay away from camp while trying to make his case for a new deal.

But what he said next was shocking.

“I know a lot of people disagree because I don’t put up all the numbers, but if you watch the games, I’m doing good things,” Bennett said. “They want me to play five positions but pay me for one.”

Listen, if I am the Seahawks I cut ties with him. I would trade him to someone that wants the headache. The defensive end has declined year after year. In 2012, Bennett racked up 41 tackles and 9 sacks, in 2013 in his first year with the Seahawks he added 31 tackles and 8.5 sacks. Last year he racked up 38 tackles and 7 sacks, but he wants a pay raise?

Bennett ranked 38th in the NFL for sacks, and was not on the first 3 pages for tackles, but he wants a pay raise, REALLY…..

I think the ball in the Seahawks court. If I was a GM, I would put a talking clause in his contract, because he is full of BS.