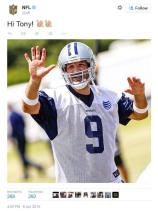 NFL responds to Cowboys quarterback Tony Romo, by trolling him on Twitter

Dallas Cowboys quarterback called out the NFL yesterday on the Colin Cowherd show, but his rant was actually followed up by NFL’s twitter account, trolling the star quarterback.

“It’s like when you’re in high school and you don’t get invited to the party, it makes you feel bad,” Romo said Tuesday on ESPN’s The Herd with Colin Cowherd. “If they really wanted to just be a part of it, all they had to do was just call and ask. It would’ve been a lot easier, I think, than going about the process the way they did. We understand that these things come about and there’s big money involved sometimes from the NFL’s perspective. If we had known about the issue of the place or thought that was something that could’ve been an issue, the NFL could’ve told us that right away. That’s where it makes it interesting.”

The NFL trolled Romo with a Twitter post of a waving Romo and the message, “Hi Tony!” along with two waving-hand emoticons.

The message was up for about 10 minutes before it was deleted, according to ProFootballTalk.com