NFL Draft Diamonds 2015-16 Bold Predictions, What did you say?

The 2015-16 NFL season is just 100 days away, and you know what that means?  Yep, we have made some bold predictions for the 2015-16 season. While some of you might not like our opinions (exactly what a prediction is), you will be okay.  We all feel one way or another about a certain player or team, but this year will be a fun year.

Comeback Player of the Year

Erin Henderson – LB – New York Jets – Yep, you read it here first.  The former Minnesota Vikings linebacker will go to New York and shine under Todd Bowles. Many wrote off Henderson, but the guy wants it, he is trying his best to make his family proud. I see him really shining in Bowles defense next to David Harris.

Offensive Player of the Year

Russell Wilson – QB – Seattle Seahawks – Russell Wilson is not going to complain about his contract, but it won’t matter. He will come out and still put up ridiculious numbers.  Wilson will eventually earn the largest contract in NFL history for a quarterback.  I won’t say it will be fully guaranteed but it will be pretty amazing.

Defensive Player of the Year

Sean Lee – LB – Dallas Cowboys – Lee has been injured the last couple years, but with the team recently moving him to weakside backer, he is not going to be so much pounding.  Lee is able to lead the league in tackles and make some huge plays.  He is a main reason the Cowboys defense ranks in the top 12 this year.

Andrew Luck – QB – Indianapolis Colts – The Colts were able to add a veteran running back and a veteran wide receiver and several key veteran players on the offensive and defensive side of the ball. Luck has a field day with his new toys and makes it look easy. Luck finishes the season with 54 touchdown passes.

Offensive Rookie of the Year

Amari Cooper – WR – Oakland Raiders – Cooper is going to ball out in Oakland and Derek Carr is going to love having him as a wide receiver.  Cooper will put up huge numbers and I feel he will shine as a rookie.  Cooper will make the Pro Bowl after year one.  Cooper finishes the season with 9 touchdown receptions.

Defensive Rookie of the Year

Jake Ryan – LB – Green Bay Packers – Many are probably trying to figure out why I put him here, but it is simple. Ryan is a tackling machine and the Packers have a huge hole at his position. I have a feeling that Ryan leads all rookies in tackles and has a year like Kiko Alonso had in Buffalo during his rookie year. 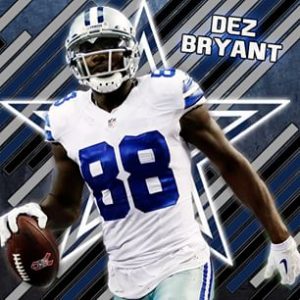 Dez Bryant leads the Cowboys to the Super Bowl

Indianapolis Colts vs. Dallas Cowboys – Colts 42 – Cowboys 49 – I am taking Andrew Luck versus Tony Romo.  Andrew Luck has a huge year and was the League MVP, but he was not able to get over Dez Bryant and Cowboys.  The Dallas Cowboys are not sure of their running back situation, but Joseph Randle does a great job replacing DeMarco Murray.  Cowboys win the Super Bowl and #88 makes a play to put them over the hump.

Dez Bryant – WR – Dallas Cowboys – Bryant finishes the Super Bowl with 11 receptions for 188 yards and 3 touchdowns. Cowboys will not be able to give Bryant the money is looking for and he will leave in the off-season.

Coach of the Year

Rex Ryan – Buffalo Bills – The Buffalo Bills go 10-6 and Rex Ryan makes the playoffs in his first year with E.J. Manuel as his starting quarterback.  Matt Cassel starts the season and is replaced by Tyrod Taylor in week 3. After an injury that occurs, the Bills turn to their former first round pick, who dissects teams all the way through week 17 earning a spot in the playoffs.  Not only did Rex earn a playoff spot, it is the first time the Bills beat the Patriots twice in one season in a very, very long time.