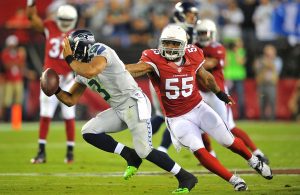 According to WGCL in Atlanta, Arizona Cardinals linebacker John Abraham was charged with battery for an incident that happened outside a strip club in February 2014, according to Pro Football Talk.

Brookhaven police responded to a call around 4 p.m. on Feb. 28, 2014, for an assault that took place the night before at the Pink Pony on Corporate Boulevard. The alleged victim was reportedly assaulted by Abraham as he was approached by the victim to resolve an old dispute. A warrant has been obtained for Abraham’s arrest on a misdemeanor battery charge.

According to the Police report obtained by Atlanta Journal Constitution, Abraham punched him several times.

Vladmir Ako, the alleged victim, told police he and Abraham used to be friends but had a falling out over finances a couple of years earlier but remained partners in a beverage business, according to a police report. Ako said he saw Abraham at the club and approached him to “squash the problems the two had experienced.” Instead, Abraham punched him in the face about five times, according to the police report.

“Ako states that he never threatened Abraham nor did he ever touch Abraham; not even in self-defense,” the report said.