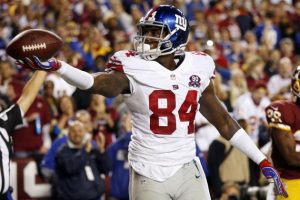 Larry Donnell came out of nowhere and blew up last year. He might have been a bigger weapon for Eli Manning that Odell Beckham Jr, but ODB received the media attention. Well today in a new story, Larry Donnell the former Grambling State tight end was on the sidelines in a walking boot.

This likely means Donnell has a minor injury, but it still could be a huge issue for the Giants later on, if he is not ready to go.