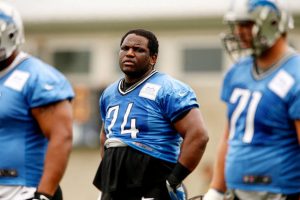 The Detroit Lions released former offensive guard Rodney Austin after he was arrested for assault and larceny.  There was rumors that the Lions would even be interested in bringing him back after the case was over. Well you can throw that out the window. Today Austin was found guilty according to Dave Birkett.

Dave Birkett    @davebirkett
Ex-Lions OG Rodney Austin was found guilty in a North Carolina court today of assault on a female, a child under 12 & misdemeanor larceny

Austin has vehemently denied the charges, which were filled 11 days after the alleged incident. He has instructed his legal team to sue Gill-Sadler for malicious prosecution, defamation of character and slander, but that will be hard now that he is found guilty of the charges.