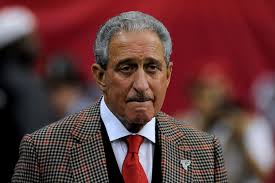 Police were called to the home of Atlanta Falcons owner Arthur Blank Monday night to investigate a possible theft, The Atlanta Journal-Constitution reported.

Police Monday night were called to the West Paces Ferry Road Northeast residence and told that three Apple iPads and two Rolex watches were missing, according to an incident report obtained by The Atlanta Journal-Constitution.

The watches, valued at about $56,000 to $120,000 each, may have been with Blank, said Debra Fay Copeland, identified in the report as the woman who called police. Blank, she told police, could not be reached to confirm that he had them in his possession because he was traveling.

Falcons owner Arthur Blank should have a better security system.