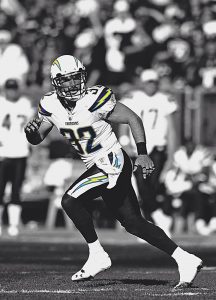 Eric Weddle’s agent went in on the Chargers, and it looks now like he is in his final season with the team

Eric Weddle is a beast for the Chargers, and a guy that has put in work time and time again. Whatever the Chargers need from Weddle he has done, and now the team is not willing to give the 30 year old safety a raise.  Well today his agent fired back at the organization.

“He will play his final 16 games as a Charger as a free safety – nothing else,” agent David Canter said. “His going above and beyond for them is why they won’t give him a contract extension. . . .

“It’s blatantly obvious after me asking the team time and again to extend us that Eric isn’t wanted. So it’s time for Eric to move on [to] where he can win and is wanted.”

That is not good, especially when you consider how the Chargers use Weddle. According to Pro Football Talk, Weddle is over used in San Diego.

Since 2011, he’s not only played practically every defensive play (98 percent), but nearly half their special teams plays as well (49 percent).

The Chargers might not realize this now, but it sounds like Weddle’s days in San Diego are about over.