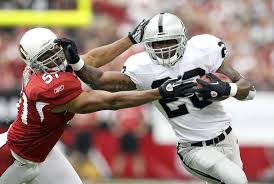 Darren McFadden is hoping to return to his rookie year form

When the Dallas Cowboys signed Darren McFadden, I personally did not think they were seriously considering him as a starter. Now they are really considering him as the starter, and McFadden is starting to feel young again.  When he spoke to the Northwest Arkansas Democrat-Gazette, he told them he is feeling like a rookie again.

“It’s great to be in Dallas,” McFadden said while running a football camp for families at Little Rock Air Force Base, via the Northwest Arkansas Democrat-Gazette. “I’m looking forward to getting on the field with those guys and doing great things this year. … Definitely exciting. I tell everybody I feel like a rookie all over again. I just want to go out there, stay healthy and run the ball the way I know I can run the ball.”

McFadden has only had one 1,000 yard season and that was year three of his career.  If he can return to that mode, he will be fine, but I am not sure that can happen.