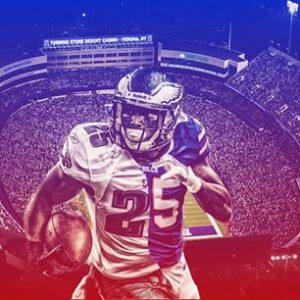 Could the Buffalo Bills be prepared to hand LeSean McCoy the ball 300 times? Well today when veteran running back Fred Jackson was asked by WGR 550, he was very honest about the Bills approach to feed Shady.

“I don’t know exactly what my role is going to be,” Jackson told WGR-AM. “They say that they want Shady to get 300-plus carries next year. So that’s a guy you’re feeding the ball all the time. So I’ll be ready when my number is called.”

Bills running backs coach Anthony Lynn, has already spoken to Jackson about cutting his carries in half for the 2015-16 season as well. Lynn says Jackson petered out at the end of the season, and he feels with less carries Jackson can be more effective.

“I talk to the guys all the time about Curtis Martin. This guy led the league in rushing his ninth year,” Lynn said, per The Buffalo News. “I’d love to see (McCoy) get that many rushes. If he’s getting that many touches, that means that we’re winning ball games.”

If the Bills do give LeSean McCoy the ball 300 times it means he would be their workhorse back. Last year McCoy ran the ball 312 times, and he had 1,319 rushing yards.  So that does not mean he cannot handle the load.