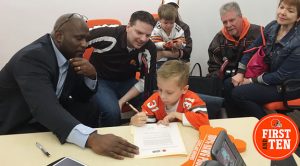 The Cleveland Browns on Tuesday signed 9-year old Dylan Sutcliffe to a one-day contract as the team celebrates the one-year anniversary of its First and Ten volunteering initiative this week. Sutcliffe, who was diagnosed with ataxia telangiectasia (A-T), joins the Browns for OTAs today after he told Make-A-Wish Ohio, Kentucky and Indiana that his dream was to play football with the Browns.

He left the press conference to riotous cheers, per the Akron Beacon Journal‘s Nate Ulrich:

Dylan Sutcliffe wrapped up his news conference with #Browns to chants of “here we go Dylan, here we go, woof, woof”:pic.twitter.com/nckKANbZzF 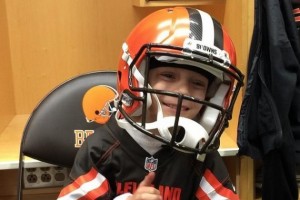 “We’re excited to add another quality player to our roster as we prepare for the 2015 season,” said Farmer. “When we first connected with Dylan, it was clear he was a competitor who had all of the right attributes to be a contributor to our team.”

“Dylan is definitely a young man who has all of the ‘Play Like a Brown’ traits, particularly through his passion, toughness and relentlessness.” said Head Coach Mike Pettine. “We look forward to seeing him bring that energy to practice this afternoon.”