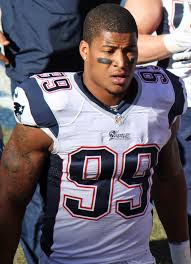 The Buffalo Bills have signed Michael Buchanan the former New England Patriots draft pick from Illinois. In a corresponding move the team released former Baylor punter Spencer Roth. Roth was a long shot to make the roster, but the team was able to find some depth at the linebacker position.

The 6-6, 255-pound Illinois product originally entered the league in 2013 as a seventh round pick (226th overall) of the New England Patriots. Buchanan, who spent the past two seasons with New England, has played in 18 career games compiling four tackles, 2.0 sacks, five quarterback hits and two tackles for loss.

Buchanan is a decent pass rusher, and is rather athletic. He is very similar to Jerry Hughes whom the Bills traded for a few years ago.