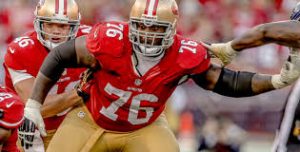 The head coach of the San Francisco 49ers Jim Tomsula might be the only person on planet earth to not be shocked by the decision of Anthony Davis retirement. I do not know how he had no clue, because it shocked the rest of the world.

“I can’t say it was shocking at all,” Tomsula told reporters in the aftermath of the news.

“Anthony’s been working on himself right now, that’s what he’s been doing,” Tomsula said. “Look, Anthony wants to step away and he wants to get his mind and his body right and that’s where he wants to go and he has every right to do that. We wish him the best.”

It sounds like the Niners were preparing for the worst with him.

“I wouldn’t say it was a topic of conversation, but yeah absolutely,” Tomsula said regarding whether the team knew this could happen entering free agency and the draft. “We’re looking, Anthony wasn’t around, he’s doing his thing. So, yeah. Obviously, you look at the things we’ve done here personnel wise and we’re very prepared for this.”