The NFL needs to recruit players from overseas harder; Look at this kid 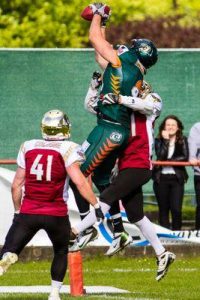 I have been scouting for years now, and one thing that always bothers me is the way scouting has become a numbers game.  If you are not fast enough you do not get a shot.  I have to give credit to the Detroit Lions, Indianapolis Colts and Minnesota Vikings, because they are always looking to improve their rosters by any means neccessary.  Vikings recently brought in the mammoth 6’9 offensive tackle from Poland who wants to slam JJ Watt, the Lions bring in rugby players from other countries all the time, the Niners actually signed Jarryd Hayne and the Colts comb through the grains to find gems.

Well since we have been around we have been contacted by many players hoping to get their name out there, but there is one kid that found us from the United Kingdom.  His name is Harry Innis.

When I opened the Facebook message I was expecting to see a little kid that couldn’t play football, because overseas, the level of competition is not that great.  Well needless to say I was wrong.  This massive 6’7 tight end from the United Kingdom has really blown me away with him film.

Last year, Innis played football for Kiel Baltic a team in Germany, and he looked like a man among boys playing.  While his biggest knock is his age (27), the 6’7, 265 pound tight end is not a chump. He manhandles the players on the line of scrimmage as a blocker, he runs good routes and has soft hands.  He recently ran a forty yard dash and ran a 4.65 which is better than a large percentage of the guys at the scouting combine this year, and he is way taller than them.

I recently spoke to him on the phone and told him I would help him get his name out there, because I feel he deserves a shot. Help us spread the love, retweet and share the story for Harry.

It will be tough for Innis to get a shot here in the United States like he would like, but he is not giving up hope.  Look at this film and make yourself a General Manager for your team. Would you bring him in to at least your camp?