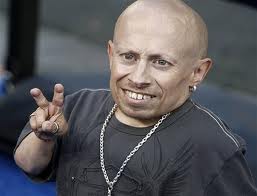 Former Pittsburgh Steeler legend Hines Ward will be staring on Celebrity Wife Swap tonight with Verne Troyer aka Mini Me from Austin Powers.

“I thought it was an opportunity to learn something from another celebrity couple,” said Ward, who will appear Wednesday, May 27 at 10 p.m. with his wife Lindsey Georgalas-Ward and their son Jaden, according to Atlanta Journal Constitution.

Ward was pumped when he found out they paired him up with Verne Troyer and his girlfriend Brittney Powell, who has a son.

“I was always a big fan of his,” Ward said, referencing Troyer. “He was a cool character on ‘Austin Powers.’ I got to know him as a comedian. He’s had a lot to overcome to get where he is today. I can relate to overcoming some adversity.”