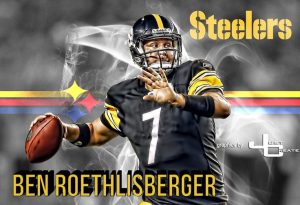 Ben Roethlisberger is ready to go for 2, and the Steelers have a very good record of doing so

Two point conversions are the talk of the NFL now, after the NFL moved the extra point back to make it a 33 yard attempt. Steelers head coach Mike Tomlin is 10-of-13 on two-pointers as Steelers coach, making all four of their attempts last year. Since 2001, the Steelers have a league-best 72.7 percent conversion rate on two-pointers. Many teams are embracing the idea, and according to the Pittsburgh Tribune the Steelers are preparing for it.

“Coach told me we were going to do it, and I was a little prepared for it,” quarterback Ben Roethlisberger said, via Mark Kaboly of the Pittsburgh Tribune-Review. “It was a little surprising knowing that we haven’t put in red zone yet and they haven’t put in red-zone defense yet. That’s going to be a big part of the game now: teams consciously going for two or at least debating it.”

Mike Tomlin was very blunt about it too saying:

“We are not going to talk about it. We are just going to do it.”