AFC East Draft Review
By: Justin Walters @SportsRuckus
We are back at it again with draft reviews by division. We all know Championships are one in the 6th round of the NFL Draft or so they tell us every year so here goes our review of the Patriot division or should I say the AFC East. 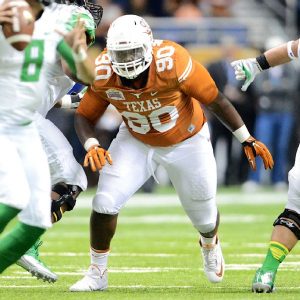 The defending Super Bowl Champs have had a deflating off-season (pun intended). They lost their nose tackle and both starting CBs. They looked to reload in the draft. In the first round Texas DT Malcom Brown fell to them. Brown is a penetrating Defensive lineman who should help in replacing Vince Wilfork. The Pats then continued their streak of yearly Saturday head scratching selections by reaching for Stanford safety Jordan Richards and DE/OLB Geneo Grissom. Richards is a smart player who is capable of getting the whole defense lined but not so capable of getting to the sideline in a cover 2 but hey Bill knows what he’s doing. Grissom at least provides versatility. They rebounded to save their draft in round 4 adding 2 of the best guards in this draft in Shaq Mason and Tre Jackson.  DE Trey Flowers isn’t the greatest athlete and is built kind of funny but he fits the team and is just a guy who always finds a way to make plays.  7th round choice CB Darryl Roberts is a player I am really high on. He has a chance to see the field and contribute as a rookie.
The Pats ended up having a decent draft, strengthening both their offensive and defensive fronts. The choice of Richards a day too early and not adding any offensive playmakers or not selecting a corner until the 7th was kind of disturbing. The rest of the division is improving so the clock may be ticking on the Pats dominance of the AFC East. 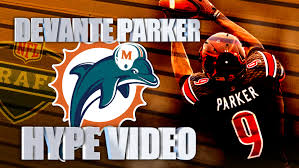 The Dolphins front office went to Chicago on a mission. The mission to become a playoff team. With their first pick they gave rising star QB Ryan Tannehill a #1 receiver in DeVante Parker. Parker has the size to go up and make acrobatic catches but can also run after the catch.  To complete their offense they added G Jamil Douglas and possibly the steal of the draft in 5th rd choice Jay Ajayi. Ajayi was getting late 1st/ early 2nd round consideration until an issue was discovered with his knee. If  he can stay healthy he would form a nice 1-2 punch with current RB Lamar Miller.  Second round selection Jordan Phillips is a massive, young, athletic DT who should only improve playing next to Suh.  A player to watch is another 5th round pick WR/CB Tony Lippett. He has the size, instincts and ball skills to be a really good CB very soon. Had he played corner consistently I feel he could have been a top 50 choice. I can’t leave out another 5th round choice, slot CB Bobby McCain is a talented corner who also will strengthen Miami’s secondary. The front office obviously has plans to get back to South Beach on day 3 because they didn’t pick again after the 5th round.
The Dolphins had a really good draft, filling most of their needs and making the offense more Ryan (Tannehill) friendly. Along with the additions on defense their playoff mission could be accomplished. 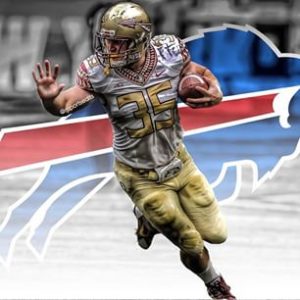 Bills found a gem in Nick O’Leary late in the draft.

The Bills were one competent quarterback from not only making the playoffs last year but being a threat to go far. Not having a 1st round pick in a draft weak in quality QB depth meant they would have no shot at adding any QB’s to come in and compete for the starting job. With their first choice which was #50 overall they chose CB Ronald Darby.  I am not the biggest fan of his tape but you can’t argue with the physical tools this kid has. He joins a top 5 defense where coaches hope he could step in and at least contribute as a nickel back.  Third round choice John Miller fills a need on the offensive line, he is a solid hard worker at guard.  The rest of their draft was rather uneventful, though the addition of RB Karlos Williams in the 5th round to an already loaded backfield was interesting. His biggest contribution should be on special teams and possibly at safety. Well at least I would give him a look there. He is a physical RB who can contribute in the passing game as well.  Dezmin Lewis was a 7th round pick who could surprise. He gives whoever Buffalo decides to have throw the ball a big target to go with their group of wide receivers.
The Bills went into a deep draft and really didn’t fill as many needs as their fans would have hoped. They didn’t fill the holes at DL and LB. They also chose TE Nick O’Leary who is a reliable target but he has a skill set very similar to current TE Charles Clay.  So for a team that seemed so close to breaking through I don’t think they did enough to make that jump in this draft. But I am sure Rex will try to convince us otherwise. By the way, the only reason the grade isn’t lower is because I counted the Sammy Watkins trade which cost a first round pick as part of this class. So this could have been really bad. 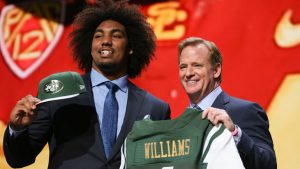 Jets drafted Leonard Williams with the 6th overall pick, he should have went 3rd

The worst thing about the draft being moved to Chicago was that their weren’t as many Jets fans there to Boo the pick.  Well it wouldn’t have mattered this year because they continued a strong off-season by having a consistent un- Jet like draft. Even the most negative fans on earth couldn’t complain. As much as I felt that they should have chosen OLB Vic Beasley, it’s hard to disagree with the choice of DE Leonard Williams, who many viewed as the top player in the draft. Adding to one of the teams biggest strengths. Second round pick Devin Smith is a deep threat who effortlessly runs by defenders and locates the ball better than any receiver in this class. Lorenzo Mauldin was their 3rd pick and should step in right away at OLB to add to the pass rush. Fifth round pick G Jarvis Harrison was the Jets best value pick, with his mix of power and athleticism he could step in and start from day 1.  Bryce Petty was viewed by many as the 3rd best QB in this draft, so getting him in the 4th round was also a good pick. He throws a pretty ball and if he can transition from the spread to a pro style offense he could see playing time at some point.
The Jets had a strong draft and filled many of their holes. Though I don’t know what their plan is with Leonard Williams and 3 DEs, you can’t argue that they upgraded their overall team talent.  They also added RB Zac Stacy by trading a draft pick as well. The Jets look ready to compete for a playoff spot and if they can get solid QB play who knows.
Related TopicsNFL Draftnfl draft afc eastnfl draft gradesNFL Draft Newsnfl draft news and notesnfl draft notesNFL Draft ProspectNFL Draft Prospectsnfl draft rumorsnfl draft time