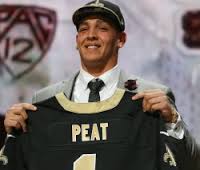 Zach Strief says he will not make it easy for Andrus Peat.

Zach Strief is getting older, but he is not ready to just hand over his starting spot to rookie Andrus Peat, who the team drafted in the first round. He also shot down the notion of him switching to play guard.

“He’s taking my job eventually….My job and my role is to make that take as long as possible,” Strief said.