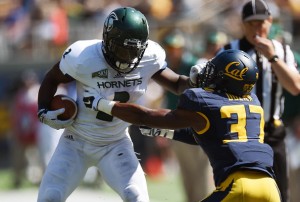 Ravens wide out DeAndre Carter is a very solid pass catcher, and he is impressing

Former Sacramento State wide receiver DeAndre Carter was not drafted but he is really making an impact in Baltimore Ravens mini camp.  Carter the former FCS touchdown leader has been impressing his teammates as well.  Ravens veteran wide out Steve Smith compared him to a Pro Bowler.

“I like (that) he’s hungry,” Smith said, per the team’s official website. “I just love his attitude. I see a young Randall Cobb in him.”

“He has done a really nice job as a receiver, and he has looked good as a punt returner,” said coach John Harbaugh.

I could see Carter making an impact in 2015 as an undrafted guy.