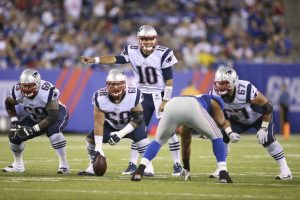 The New England Patriots drafted Jimmy Garoppolo from the Eastern Illinois in the 2nd round of the 2014 NFL Draft.  Garoppolo was the Walter Payton Award winner, a true gunslinger, and an amazing talent. After an amazing East/West Shrine game, Garoppolo was invited to the Senior Bowl and later to the Combine.  He was able to prove to NFL teams that he was worthy to play at the next level and the Patriots drafted him to be the heir apparent of Tom Brady. They were not assuming that Jimmy would have to step in right away, but with the recent suspension of Brady, Garoppolo will have to play sooner rather than later.  Today when Robert Kraft the Patriots owner was asked about his back-up gunslinger by Peter King of MMQB, Kraft did not seem very confident.

“My gut feeling is the same as yours,” Kraft said. “He is a very hard worker, a very fine young man, but until the bullets are flying and you’re out there, no one knows. Think about how many of these first-round picks, even, don’t make it. He works hard and he studies hard, though.”

I think Kraft needs to stop crying because he has a good player in Jimmy. I would not be shocked to see Jimmy Garoppolo pull of the Tom Brady and take over as the starter. Jimmy could make Tommy Boy expendable.