Patriots head coach should have been suspended as well; NFL says they were repeat offenders 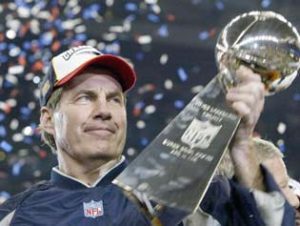 Bill Belichick needs to be suspended for cheating. The Patriots head coach is quite the cheater.

The New England Patriots were punished hard by the NFL yesterday, but I believe they should have punished Bill Belichick as well.  You are the leader of your football team, your players do what you say. If they don’t they are released, which means you ultimately have power over your players.  Just like the Bully scandal in Miami last year, there is nothing that is going on in the locker room that you do not know about.

Bill Belichick is a gangster if you really look at his past.  The man will go down as one of the greatest coaches to ever coach, but he has been caught cheating numerous times.

So when Bill Belichick removes those four golden Super Bowl rings, will there be bands of green on his fingers created by the tarnish of cheating?

Patriots and coach Bill Belichick are lousy at cheating, and if you look at it they went nearly a decade not winning a Super Bowl following Spygate. Now this.

So will the Patriots chances of getting back to the big game be over?  I am not sure of that, because I am sure they will come up with something else to get over on NFL teams.  Who knows, maybe Belichick will eventually take the fall for one.  Until it happens, I will not believe it.