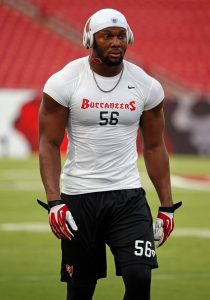 Last season, Watson began the season with Jacksonville and appeared in nine games with one start. He posted 14 tackles before being released in November. He then signed with the Cowboys and played in one game.

The 6-foot-2, 240-pounder originally entered the NFL as a seventh-round draft pick by Tampa Bay in 2010 out of Florida State. Watson spent four seasons with the Buccaneers.