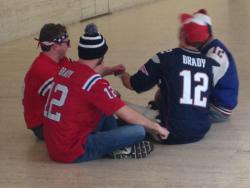 Patriots fans hancuffed themselves to each other protesting the NFL’s decision in New York.

According to Pro Football Talk, four New England Patriots fans have organized a sit in protest at the NFL offices in New York.  They have reportedly been kicked out by security and Police, but this is getting bad haha.

Four Patriots fans associated with Barstool Sports have parked themselves in the lobby of the NFL’s Park Avenue headquarters in New York to express their displeasure with the penalties handed down to quarterback Tom Brady and the Patriots on Tuesday. The four protestors, all of whom are wearing Brady jerseys, first paraded in front of the building with signs before moving inside the building to stage a sit-it while handcuffed together.

It remains to be seen if they also plan to move onto tampering with the steam pipes, but the New York Police Department may not give them the chance. Twitter user Lisa Kraus Edwards has been documenting the protest with pictures on Twitter, including the one on this page, and reports that  police are on the scene to put an end to the scene at the behest of NFL security.