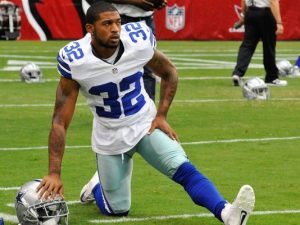 Cowboys are trying to get cornerback Orlando Scandrick under contract by the end of the week.

According to Todd Archer of ESPN Dallas, the Dallas Cowboys will get cornerback Orlando Scandrick back on Monday for their workouts. Scandrick will be on hand for the first time with hopes of getting a new deal by the end of the week.

Todd Archer    @toddarcher
When the Cowboys get back to work on Monday, CB Orlando Scandrick will be at Valley Ranch with teammates with eye on new deal by end of week

According to Archer, Scandrick and his agent, Ron Slavin, met with the Cowboys last week in an effort to get a reworked contract. Cowboys owner and general manager Jerry Jones said he was optimistic the sides could work something out.