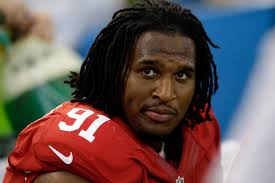 Ray McDonald might be the guy that has teams begin to put clauses in their contracts.

NFL teams need to protect themselves and Ray McDonald is a perfect example of that. Just a month ago the Chicago Bears offered Ray McDonald a one year deal worth 1,050,000 dollars.  While that is not a huge contract, the team could be forced to take a cap hit of 1 millions plus dollars.

If you remember correctly the Atlanta Falcons gave Michael Vick the biggest contract in football history and the team was able to void the contract after he was arrested for fighting dogs.  Earlier this year the 49ers made a contract for Aldon Smith which was once considered a fully guaranteed deal on the first day of the new season, but that was restructured.

Entering the final year of his deal, which is scheduled to pay him $9.754 million in 2015, the one-time All-Pro outside linebacker agreed to a restructuring of his contract Thursday.

Smith’s salary, which would have become guaranteed on the first day of the new league year, now will be converted into a series of non-guaranteed bonuses that would add up to the salary if he meets the requirements, a league source told ESPN NFL Insider Adam Schefter.

NFL teams need to prepare contracts better so they are easier to get out of them. Either do this or put a clause in saying that if they are arrested they can have their contracts voided.  I can see this happening very soon.