NFL Draft Diamonds Grading the Draft: NFC is up; Vikings and Bucs killed it 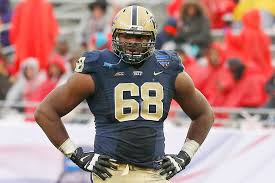 I love that the Vikings selected T.J. Clemmings from Pitt in the fourth round

Best Pick – David Johnson – The UNI back has great hands and can pound the ball.

Sleeper Pick – Rodney Gunter – We love this kid, watched every game of his and he will ball out in the NFL.

Best Pick – Justin Hardy to go along with Roddy and Julio….WOW

Sleeper Pick – Tevin Coleman is an elusive back, who could take reps away from Freeman

Best Pick – Devin Funchess – Cam needed more weapons, this will be fun to watch. Pairing him with Kelvin B and Greg Olsen.

Sleeper Pick – David Mayo!!! I love this guy, his long hair and physicality is amazing. The kid is a freak

Best Pick – Jeremy Langford is a very solid player that can help Matt Forte out as a pound back.

Sleeper Pick – Tayo Fauluje is a big man, the mountain of a man can immediately help the Bears now

Best Pick – Randy Gregory at #60? I am not even saying anything else

Sleeper Pick – Ryan Russell is a very sound player, with great technique. He could end up better than Gregory when it’s all said and done.

Best Pick – Ameer Abudallah might be the best running back the Lions have drafted since Barry. He has issues holding the ball, but he runs hard.

Sleeper Pick – Mike Burton reminds me of Brian Leonard, and he loves physicality.

Best Pick – Ty Montgomery is one of my favorite wide outs in the draft.  I love the pick and feel he will tear it up in Green Bay’s offense.

Sleeper Pick – Jake Ryan might be a starter by week one. The Packers need help at linebacker and the kid has heart.

Best Pick – T.J. Clemmings should have been taken in the second round, and the Vikes were able to get him in round 4.

Sleeper Pick – MyCole Pruitt is a very solid tight end with great speed.  Vikings will use him a lot as a rookie.

Best Pick – P.J. Williams from Florida State will be a starter in the NFL.  He should have been a second round pick, and fell.

Sleeper Pick – Davis Tull is a special kid. He might be the most athletic white boy since Jason Sehorn, and he plays linebacker….

Best Pick – Landon Collins will start for the Giants, and it was a brilliant trade by Jerry Reese and company

Sleeper Pick – Geremy Davis from UConn has speed, and great hands.  He has heart and the Giants do a good job at finding wide outs.

Best Pick – Nelson Agholar will replace Jeremy Maclin and probably will not miss a beat.

Sleeper Pick – JaCorey Shepherd was rated as a third rounder, and the Eagles snagged him with the 191st pick. Great Value

Best Pick – Eli Harold from Virginia was projected as a first round pick, he fell to 79 and the Niners did what every other team should have, and that is select him.

Sleeper Pick – Trent Brown is a big man, and I could see him eventually starting on the line.

Best Pick – Tyler Lockett is a top five wide out of mine. I love this kid, he will tear it up in Seattle.

Sleeper Pick – Mark Glowinski from West Virginia is a mauler.  He will be a starter soon, mark my words.

Sleeper Pick – Bryce Hager is a machine, and I love his ability on the field. He is a great kid and a playmaker

Best Pick – Jameis Winston is the best player in the draft, the Bucs finally have a Franchise QB.

Sleeper Pick -Kenny Bell will be a great slot WR, who can spread the field.  He will score 6 plus TD’s this year.

Best Pick – Arie Kouandjio is a very strong kid. I like him better than his brother Cyrus currently on Buffalo.

Sleeper Pick – Austin Reiter is a nasty offensive lineman, who the Redskins coaches will fall in love with.