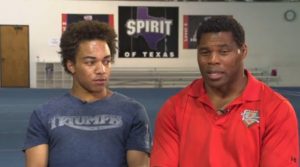 Herschel Walker is one of the best running backs from the mid 90’s and now the former Georgia legend is in the news again.  This time it is for his son.  NO he is not a star running back, but rather a cheerleader.

Walker’s son Christian decided to go a different route than that of his father, and enter the world of competitive cheerleading. There were many who were shocked upon learning the son of such a football stud wouldn’t at least attempt to follow in his father’s footsteps.

“When everyone first found out about me cheerleading or, like, my dad’s fans, they were really critical,” Christian said. “It just seems like they had a stereotype about cheer, that it was just for females.”