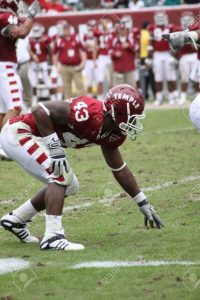 Adrian Robinson Jr. is dead at the age of 25. He was with the Tampa Bay Buccaneers last season

There are multiple reports around the web that former Temple Owls pass rusher Adrian Robinson has passed away.  Robinson was just 25 years old, and the cause at this point has not been released. In 2008, Robinson played in all twelve games for Temple, including three starts at defensive end.

Michael Gehlken    @UTgehlken
Adrian Robinson, OLB who spent month with Chargers in 2013, died last night. He was 25. No further details at time. Had months-old daughter.

In his sophomore season Adrian Robinson Jr. was named the MAC Defensive Player of the Year. He also earned such accolades as 2009 first-team All-MAC honoree, first-team All-MAC by Phil Steele, 2009 MAC Defensive MVP by the Sporting News and ESPN.com’s All-Non-Automatic Qualifying Team selection. He went undrafted in 2012, and bounced around the league. Last year he was on the Buccaneers roster.

“It deeply saddens all of us to share with you that Adrian Robinson Jr. passed away last night at the age of 25. Adrian was a beloved father, son, brother, friend and teammate. We ask that you please respect his family’s privacy during this difficult time, and especially keep his daughter Avery Marie in your prayers. Thank you for all of your support and consideration.”