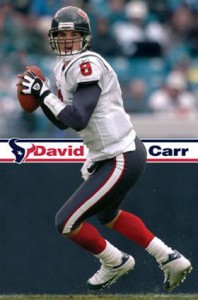 Pro Football Talk’s Mike Florio has been all over the Deflategate story and this story they found an interesting report from a 2006 article from Judy Battista, formerly of the New York Times and currently of NFL Media.  It focuses on quarterback preferences regarding their footballs, and it includes the following paragraph regarding the preferences of former Texans quarterback David Carr.

“Carr, like several other quarterbacks, said Denver was one of the toughest places to play,” Battista wrote. “He said he thought the ball expanded slightly at the altitude and felt slick because of the lower humidity. Before Houston’s preseason game at Denver, Carr instructed the ball boys to let a little air out of the Texans’ footballs.”

It sounds like Brady might not be the only player to want the air out of the ball?

Wouldn’t it be interesting to see all the former quarterbacks stand up and say the same thing just to save Tom Terrific’s name?