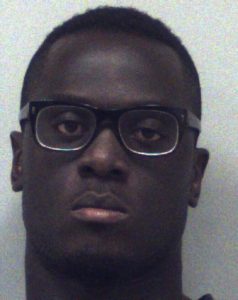 Prince Shembo looked like a square in his mugshot

In the case of former Falcons linebacker Prince Shembo, his lawyer claims he is innocent.  It will be very hard to prove that he did in fact kill the dog, unless the injuries do not add up.  Shembo’s attorney told the Atlanta Journal Constitution that his client did not mean to kill the Yorkie.

But the Yorkie’s injuries were extensive, according to police. Friday afternoon, Shembo, 23, was charged with aggravated cruelty to animals, a felony, Cpl. Michele Pihera said. Within two hours, Shembo was released from the team, and Friday night, he surrendered to authorities. He was released shortly after 10 p.m. after posting $15,000 bond, jail records showed.