Former Falcons linebacker Prince Shembo has a shaky past; Investigated for sexual assault 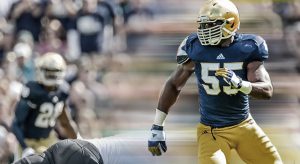 Prince Shembo has a checkered past, and this could be brought up at his new case for killing a dog

Former Notre Dame linebacker Prince Shembo admitted last year that he was investigated for sexual assault allegations made by a Saint Mary’s College student who ended up committing suicide back in 2010.

“I’m innocent,” Shembo told ESPN.com in an interview. “I didn’t do anything. I’m, pretty much, I’m the one who ended it and pretty much told the girl that we should stop, that we shouldn’t be doing this and that’s what happened. So, I don’t know.”

Back in September 2010, Lizzy Seeberg, a Saint Mary’s College freshman, committed suicide after accusing an Irish football player of sexually assaulting her in a Notre Dame residence hall. So it sounds like Shembo could have a wicked past. It definitely makes you ponder that he could have been involved with the sexual assault.