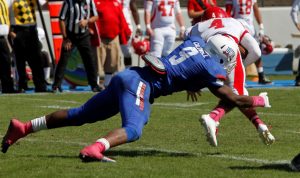 Yesterday, Darrius Caldwell the former West Georgia pass rusher applied to enter the 2015 NFL Supplemental Draft. Caldwell became the first player to enter the Supplemental Draft this year and he might not be the last.  Caldwell is a big kid at 6’5, and 245 pounds who can truly set an edge.  Caldwell transferred from Illinois and last year at West Georgia put up some pretty impressive stats.  He finished the year with 69 tackles, 18.5 tackles for loss, and 12 sacks.  He could very well be a guy that a team takes a flyer on, so here is a little information on the former D2 standout.

Why did you choose the Supplemental Draft?

I had some academic issues, I was a couple hour short. I have a son and missed a little time with some family issues. They said I would have to sit out a year if I didn’t make up the time.

You started your career at Illinois, then transferred to a JUCO school at Pearl River Community College and then ended up at West Georgia, that is quite a few schools. Why did you bounce around?

I was initially recruited to go to Illinois to play with Coach Ron Zook.  At the time, I took my visit I really liked the staff and the guys on the team. I loved what Coach Zook stood for.  After Coach Zook was fired, I stayed with the new staff because of Coach Gilmore.  After Coach Gilmore left, I felt it was right to leave and asked to be released.  The coach said I couldn’t leave their school unless I couldn’t play at a D1 school and I agreed to the terms because I felt it was right.

I went to Pearl River because I feel I was made out to be a bad person by the media. They made it sound like I was kicked off the team.  I was at Pearl River and my girlfriend got pregnant, and I was being heavily recruited by several D1 schools. I was getting recruited by South Carolina, but I was only at Pearl River for 2 semesters.  Arizona State was still showing interest and on the visit I realized how far away from my family and my future son. So I decided that West Georgia was the best place for me because of my family.

Who was your role model growing up and why?

My role model was my Mother, she was a hard working lady who did everything she could to protect us and keep us on the straight and narrow. My father passed when I was four and she provided for me as a security officer.

Will you be holding a Pro Day for the Supplemental Draft?  If so when will it be and where?

I don’t know the exact date right now, but it will likely be at Grady High School Stadium in Atlanta, Georgia

I played basketball and football

Have you played any other positions in football?

I played wide out, and tight end in high school

If you could compare your play to one player in the NFL, who would it be?

What is the biggest obstacle you have ever had to overcome in your life?

Probably making the decision to not going to Arizona State and choosing West Georgia.  Arizona State’s recruiting seemed very sincere in their interest, but I knew that if I went to West Georgia I would have to double my standards, but it was worth it.

I sit at my locker, cover my head with a towel put my music on and think about how far I have came, to be where I am today. A lot of things go through my mind before the football game. I reflect back on how many people have made sacrifices for me, and say a prayer for them.

Who was your favorite team and player growing up?

My favorite team was the Tennessee Titans and my favorite player was Jevon Kearse or Steve McNair.

If you could have dinner with three people, Dead or Alive who would you choose?

My father, I never really able to build a bond with him, because I was four when he was killed. Second would be Ray Lewis and third would be Deion Sanders.

What is the first thing you will buy with your first NFL check?

I would have to get my Mother situated, she deserves it.