Donte Rumph Story; An NFL Free Agent willing to sacrifice it all for another opportunity

Donte Rumph aka “Cupcake” the former University of Kentucky defensive tackle is probably best known for his appearance on HBO’s ‘Hard Knocks’ while in camp with the Atlanta Falcons last summer. His opportunity came to an end after being released on national television. Rumph is now willing to sacrifice it all to get another opportunity.


A year later, Rumph and his Fiance’ are still hoping to find the massive 6’3, 320 pound run stuffer a new home. After camping outside Falcons headquarters and producing a video about his struggles (Above), defensive tackle Donte Rumph is determined to land another opportunity.

We contacted Donte to ask him a few questions about this journey and he was nice enough to answer them.

Many players do not have the drive and will that you do. Recently you camped out in front of the Atlanta Falcons facility in a tent to hopefully get another shot at the NFL.  How did you come up with that idea?

Well honestly it was my fiance’s idea but what started off as a joke later became a reality. The tent of faith is more than just camping out for another opportunity but it was also supposed to motivate and inspire others to never give up and follow their dreams. If you are dedicated to your dreams, then what are you willing to sacrifice to fulfill your dreams? For me, I’m willing to put my humility on the line.

That is amazing, because after that video posted you were given an opportunity weren’t you?

Yes, it is so funny because after 4 days of camping out, the US Marshalls came and basically told me take everything down and pack. While doing so, I was sharing my story and explaining my reasoning for doing this. One of the officers started to tell me about his son’s accomplishments in college and how he is trying to be drafted as a defensive lineman.

Then he said no means no.

I was insulted and embarrassed but I still stuck strong to my movement as well as still maintaining the faith! Shortly after the officers left, my phone rang and it was the NY Jets wanting to fly me out to attend their mini camp. I just looked up and starting thanking God because it was God saying don’t worry about him, I got you son! 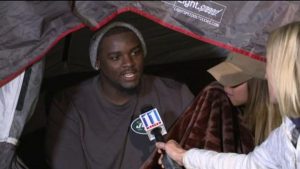 Donte Rumph will keep sitting in a tent, until his dream becomes a reality

We at NFL Draft Diamonds are huge believers in Christ as well, so that is not news to us. He always comes through. After seeing the video, I knew you would get a second chance. Many players are getting released and many will be released soon when rosters are cut down. What do you have to say to the players who are in the same situation you are?

Basically I would say to never give up, keep striving for success. Also, it is ESSENTIAL that you understand the business behind the game because at the end of the day this is a job, it’s more than football. It is a livelihood and your career is at stake. I was oblivious to that aspect of the game and it almost cost me my career due to that and misrepresentation. That’s why you have to make sure that your agent is committed to you, and that you both have great communication skills. Also make sure he cares and respect you and your family’s well-being. I would also make sure you both share the same values. Also try to remember that no matter how bad things may seem to always keep God first in everything that you do!

What is your ultimate goal?

My ultimate goal is to gain another opportunity but share my experiences with other professional athletes in the same or similar situation. This way other athletes would not have to go through what I did. Also to inspire people to never give up on the dreams.

Right now the NFL could use a little positive publicity.  Here is a great story to hang your hat on Roger Goodell, a kid willing to sacrifice his everything to get a second chance.  When the NFL has stories of players killing people, players cheating and players beating their wives, it seems the negativity of the NFL has become the new era of football.  Why don’t we talk about the success stories anymore?  Donte Rumph might still be working on his dream of becoming an NFL player, but at least he is still trying.  Rumph has not given up his fight, and he is here to inspire others on the same path.  This sounds like the leader I would want in my locker room.

Ask yourself this who would you rather have Donte Rumph or a player not willing to sacrifice anything?

Give me Donte Rumph!