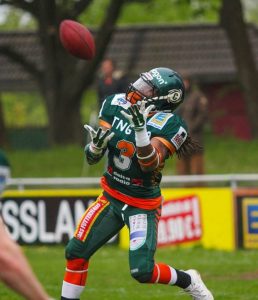 Many people do not pay much attention to Missouri Valley College a small NAIA school, but there was a kid that could play both sides of the ball and do it all.  He is now showing his talents overseas.

That player was Tyler Davis the cornerback, who is very athletic. After having a tough time hearing from NFL and CFL teams, he took his talents to Germany.  Since playing in Germany the speedster has been dominating the league.

The film is from last season with the Munich Cowboys where he killed the league. Davis had 28 receptions for 686 yards and 7 touchdowns. He hauled in 6 interceptions, had over 400 return yards and 1 touchdown, and racked up 34 tackles.

Davis is playing right now for Kiel Baltic Hurricanes in Germany, the same team that produced the 6’7 tight end Harry Innis who we featured a few days ago.  Davis has an interception and a touchdown in every game so far.  In two games played Davis has 2 interceptions and 13 receptions for 128 yards and 2 touchdowns.

If you are interested in Tyler contact us at [email protected] and we can help you get in touch with him.