Chip Kelly loves to go for 2; Could Tim Tebow make the team for that reason alone? 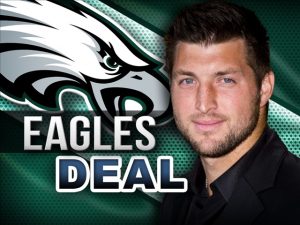 Going for two is not a common practice in the NFL, but Chip Kelly already proved he is not a common coach.  Kelly is the only coach willing to give Tim Tebow a shot, he was able to get rid or LeSean McCoy and sign two running backs for the same price of McCoy, who together are a better option than just McCoy. The team has Darren Sproles, Sam Bradford, some decent young wide receivers, Riley Cooper and now Tebow.

Could Chip Kelly turn back to his Oregon days and run two point conversions a bunch of the time?

At Oregon, Kelly attempted a total of 23 2-point conversions, 16 of which were out of an unconventional offensive set. According to Matt Takimoto of AddictedToQuack.com, the Ducks were successful on 13 of those 16 unconventional attempts, or 81%.

Many Duck fans who follow the team closely know Chip Kelly’s two-point strategy: the coaching staff prepares a number of options out of the “swinging gate” formation, and it’s up to the holder (Nate Costa in ’09 and ’10, then Jackson Rice) to identify a possible mismatch in coverage and try to steal a point. If no mismatch exists, the holder simply calls the team to line up in the extra point formation, and they kick. Only twice since 2009 did an Oregon team attempt more than one two-point conversion in a game: the BCS title game, and the 2011 loss to USC. In both cases, at least one of the tries was situational. So you’re only seeing the swinging gate once a game. And in every case but one, against UCLA in 2010, the gadget conversion came after Oregon’s first touchdown.

Kelly does not use this chart, but could we see a new practice in the NFL with the rules? Remember the Eagles proposed a change during the Owner’s meetings.

Philadelphia proposes snapping from the 15 for the kick, but moving the ball to the 1 for a 2-point conversion. The Eagles also want the defense to be able to score the points if it returns a turnover on the 2-point conversion to the other end zone.

While the Eagles did not get what they wanted, they did get something. If the kicking team can draw a penalty on the extra point, the second attempt will be ran from the 1 yard line.  I would expect the Eagles to do everything in their power to get you to jump offsides or catch you slipping. If you do, you might as well expect Tim Tebow.