Cam Heyward wants a new deal with Steelers, but will not ruffle feathers 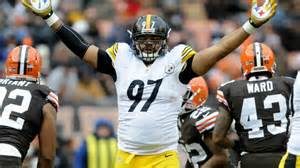 Cam Heyward wants a new deal with the Steelers, but will not complain

Cam Heyward has been a pretty solid player for the Pittsburgh Steelers since entering the NFL, and the even though he is in the  final year of his contract, he would like some assurance he will be a round for a longer period of time.  He would like to sign a second contract that will put him not he road to remaining in Pittsburgh “for the rest of my life, football and after.”  He is not going to make a scene though, because he wants to remain a Steeler.

“I’m not here to ruffle feathers or make waves,” Heyward said, via the Pittsburgh Post-Gazette. “I’m not one of these guys who thinks about their contract while I’m here. I would love to have it done as soon as possible, but I’m not in any rush. I’ll let the cards fall where they might and continue to improve.”

This is a smart man, I like his approach. Go Play hard, and you will be rewarded, I have a feeling they will come through too.