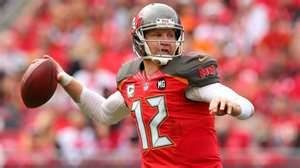 The Cleveland Browns were not able to land a quarterback in the draft, but that is okay, because they are confident in Josh McCown.  When Mike Pettine the Browns head coach was asked on 92.3 The Fan in Cleveland if McCown is the favorite to be the starting quarterback going into training camp, Pettine said, “I think it’s fair to say that.”

I think for the Browns you have to assume that McCown is the starter, with the salary they gave him.  When you are paying a man 5 million dollars a year, he better be the starter.  I would not count Johnny Football out though.