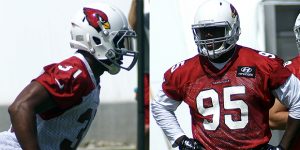 David Johnson and Rodney Gunter are two steals that will shine in Arizona for the Cardinals.

Many people questioned the Arizona Cardinals last year when they drafted John Brown, the former Pittsburg State wide receiver, and how did that turn out?

I invited John Brown to the East/West Shrine game and while many people questioned us, he tore it up. Brown had a monster rookie year, and now people are trying to question their picks this year.  While NFL.com feels David Johnson was a good pick from Northern Iowa, they question Rodney Gunter. Chase Goodbread said this about Gunter.

The Cardinals not only picked a sleeper in the top half of the draft, they traded up to do so. Gunter is said to have freakish athletic skills and the versatility to play inside or outside, traits the Cardinals are obviously believers in. Gunter also assigned himself J.J. Watt-like potential, so he has at least as much confidence in himself as Arizona does. Coming from small-school competition, it won’t be a shock if he doesn’t pan out.

Well folks, I am here to say this.  Get ready for Gunter to prove you wrong.  The former Delaware State defensive tackle is still a little raw, but he is so athletic with the right coaching, he will be dominating the league for years to come.  Today the head coach Bruce Arians talked well about running back David Johnson, the Northern Iowa product taken with the No. 86 overall pick in the draft.

“Very, very bright,” Arians said, per Kent Somers of The Arizona Republic. “The kid can do anything as far as a wide receiver, running back, fullback. He will find a niche quick because he can learn so much.”

The small schoolers are going to shine this year for the Cardinals, and their scouting staff obviously are doing their due diligence.