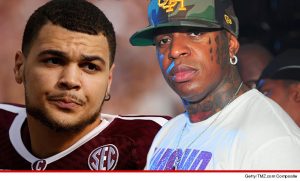 Mike Evans was the first player to sign with Cash Money Sports, his agent is Deryk Gilmore of Priority Sports. All three of these men have the same agent.

The NFL Draft is now over, and La’el Collins is still looking for a job. This draft had many interesting stories, but no more than what Priority Sports Management went through.  La’el Collins story is probably the wildest since he fell out of the first round and did not even get drafted, but let’s look at the other stories.

P.J. Williams was arrested for DUI a few weeks before the draft.  The former Florida State Seminoles cornerback is signed by Priority Sports.  He fell and dropped out of the first round, and was eventually drafted with the 3rd pick number 78 by the New Orleans Saints. He lost millions of dollars, which is insane when you think about it.

Randy Gregory is another player as well that dropped badly.  The projected 5th overall pick lied to NFL teams at the NFL combine saying he had not smoked weed since November, but some how failed the drug test at the Combine.  He also signed to Priority Sports.

So, now that we have that under control it sounds like P.J. Williams, La’el Collins, and Randy Gregory are basically under Cash Money Sports/Priority Sports now.  While this might not mean a lot to many, it is definitely interesting considering that all these players are dropping due to bad background issues/red flags.  If you remember correctly, Mike Evans even had a case come out when he was involved in a fight before the NFL Draft.  Just sounds like the agency is more worried about partying and money than their players.  Maybe La’el Collins did the right thing by avoiding his agent and meeting with Rex Ryan last night. While many will say he went Rogue, I think he did the right thing.  Collins needs to get a pay check, not worry about his alibi’s at this point.