A 33 yard extra point? It could be happening very soon 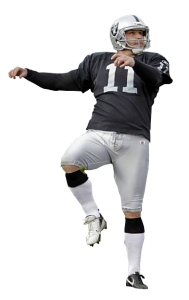 Sebastian Janikowski should not have a problem hitting a 33 yard extra point.

Owners meetings for the NFL are this week, and it sounds like the NFL is set to change the extra point once and for all.  The game is about to get more interesting especially if the game is down to one point. According to Kevin Seifert of ESPN, the NFL is expected to vote this week and there are three proposals. The one that Seifert feels will have the best shot of passing is moving the extra point back to a 33 yard field goal.

NFL place-kickers have been converting at least 98 percent of their extra points since 2000. That figure has hovered above 99 percent since 2010, providing little incentive to go for two-point plays. Coaches attempted them after just 4.9 percent of touchdowns last season; they were converted at a rate of 47.5 percent. There were 41 field goal-attempts last season from 33 yards. Only two were missed. The conversion rate for 33-yard field goals over the past five seasons is 92.8 percent (154-of-166). An extra point from the 15-yard line would be incrementally more difficult but still converted roughly 95 out of 100 times. If the rule were in place last season, when 1,230 extra points were attempted, there would have been about 62 misses based on those percentages.

This will not be as easy as people think and could make games more entertaining.  I think it is a good change, and it will make kickers a little more valuable.