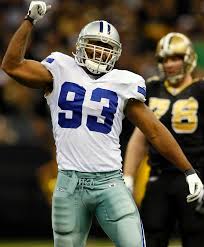 The New Orleans Saints have signed LB Anthony Spencer to a one-year contract.

Spencer, an eight-year NFL veteran was originally a first round draft pick (26th overall) of the Dallas Cowboys in 2007 and has played both linebacker and defensive end as a professional. In his eight seasons in Dallas, he played in 104 games with 67 starts and has posted 497 tackles (317 solo), 33 sacks, 17 passes defensed, 12 forced fumbles and six fumble recoveries.