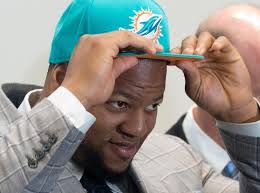 This off-season may be considered a huge win for the Dolphins because they landed Ndamukong Suh via free agency, but what else have they done?

The Dolphins lost 15 players including 11 starters, to only sign 7.

The Dolphins signed these 7 guys:

While the Dolphins still have 12 million in cap space, they are not doing anything to help their team. Instead they are talking about the living rooms they have recently sold out at the stadium.

Team president and CEO Tom Garfinkel told ESPN.com on Monday that the team has sold out of the 32 “living rooms” the team is building as part of its stadium renovation.

“We wanted to create an end-to-end luxury experience, and the response has been tremendous,” Garfinkel said.

Instead of worrying about the new living rooms that cost $75,000 a season and include food and drinks and access to a lounge area, the team needs to worry about putting a product on the field.  They have too many holes to just sit back and think they can compete in the AFC by not finding replacements. The Dolphins still have the draft, but they have to hit on their picks, if they want to win.