Marcus Mariota scored a 33 on his Wonderlic Test 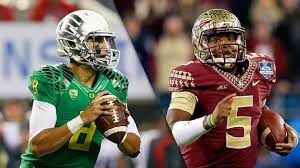 Yesterday news broke from Yahoo Sports that Jameis Winston scored a 27 on his Wonderlic Test, but he is not the only score that Yahoo Sports was able to receive.  They also received Marcus Mariota’s test results and they were impressive.  Mariota scored a 33, which is pretty solid compared to the big time quarterbacks in the NFL.

Some of the highest scores from other prominent and successful NFL starting QBs include the Indianapolis Colts’ Andrew Luck (37), the Green Bay Packers’ Aaron Rodgers (35), the New England Patriots’ Tom Brady (33) and the San Diego Chargers’ Philip Rivers (30).

That does not mean he will be as solid as any one of those quarterbacks, but it does show you where he ranks with the upper echelon.