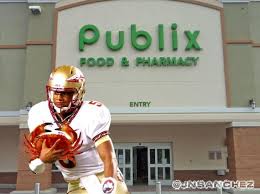 Jameis Winston was a man and took the arrest like a Champion. Now he tells the truth.

Former Florida State Seminoles starting quarterback Jameis Winston was picked on badly for taking crab legs from a Publix employee and walking out the front door. He was charged for not paying, but the truth is now coming out.

“The week before it was my buddy’s birthday and we had got a cake and we met a dude who was inside Publix,” Winston told them. “And he said, ‘Hey, any time you come in here, I got you.’ So that day, we just walked up and he hooked us up with that.

“And when I came in to get crab legs, he did the same thing. And he just gave them to me and I walked out. Someone from inside the store said I didn’t pay for them and that’s how the whole thing started.”

When he was arrested, he told deputies he had forgotten to pay; he eventually paid the $32.72 and did 20 hours of community service.

While Jameis has a lot to lose than the Publix employee, it sure is interesting that he was willing to take the blame and not tell on the man when it happened.  At least you can trust him….